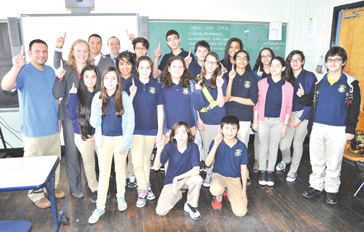 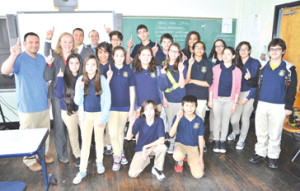 Oliver Street Elementary School (pre-K to 8th grade), part of the Newark Public School District, has been named one of five winners in the nationwide Samsung Solve for Tomorrow contest, which challenges students to apply STEM (Science, Technology, Engineering and Math) solutions to problems facing their local communities. The Oliver Street students’ project, Guarding the Water Supply, focuses on cleaning the polluted Passaic River, which runs through their city. The school has won $140,000 in technology for the school, which will be used to further develop their river project as well as to enhance and expand the school’s existing STEM program.

The Oliver Street School STEM team has been working on Guarding the Water Supply since the fall, when they began designing a system to reduce the amount of street garbage flowing into the Passaic River after a heavy rain. The students researched, developed and created several models of sewer grates to catch the waste. They tested the grates during a storm, assessed and innovated based on how well the designs worked. The successful prototype became Oliver Street’s contest entry, which they then presented to a panel of judges at the South By Southwest Education (SXSWedu) conference in Austin, Texas earlier this month. Along with enthusiastic support from the officials, the team got thousands of “clicks” from their home state and across the nation as the contest was crowd-sourced through online voting. The students are hoping that their winning design can be put into actual use, both in their own community and beyond, as the grate they have designed can be modified to fit any sewer system.

Oliver Street, along with the other top five contest winners, will be able to choose their prize equipment from a list of Samsung products, which includes items like laptops printers, touchscreen displays and monitors, as well as Adobe Premier Elements licenses and cash grants from both DIRECTV and Forbes. Additionally, the winners will be invited to Washington, D.C. for a celebratory luncheon and arranged meetings with their respective senators and House representatives.

Kearny, NJ|Plastic bags “out” in Kearny

Seth Grossman, Executive director of IBID to Luso-Americano:“Newark is the next Silicon Valley”